The public is invited to Bethel Park’s Memorial Day Program on Monday, May 31 to honor the fallen.  The event, consisting of a Ceremony at the Veterans Memorial, Parade and Cemetery Service, strives to create public awareness and remembrance for those who gave their lives for freedom, the supreme sacrifice for their country.  Program details below

The American Legion’s Annual Memorial Day Parade and Cemetery Service.  Marchers carrying flags representing each service branch will participate and escort 8-10 riflemen who will serve as an honor guard attending to the flags.  Additional names will be added to the over 3,500 already in place on the Veterans Memorial representing those from the American Revolution to today.  A U.S. Airforce C-17 airplane will conduct a flyover as well.

Memorial Day Speaker Bethel Park Manager Laurence J. Christian will discuss what Memorial Day means to him in regard to the time he served in the military as well as the many individuals in his family who’ve served and are currently serving. (Laurence’s bio and photo are posted below)

Parade – 9 a.m.  Route begins at the Municipal Bldg. on West Library Ave; left on Highland; left on Bethel Church; and ends at Bethel Cemetery, adjacent to Bethel Presbyterian Church on Bethel Church Rd.  Approximately 50 organizations are participating including the First Frontier Mechanized Calvary featuring 6-10 jeeps from the WW II era and a horse-drawn carriage with Betsy Ross and George Washington riding inside.  The parade will also feature a variety of other antique military vehicles.

Service – 10 a.m. Will be held at Bethel Cemetery immediately after the Parade.  Master of Ceremonies will be Scott Barber, Commander of the American Legion, Post 760.  Highlights include patriotic music, comment from local dignitaries and military representatives, recognition of Bethel Park’s Fallen Heroes, and a Deceased Roll Call. 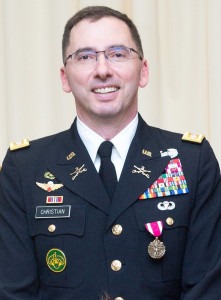 LTC(R) Laurence Christian currently serves as the Chief Administrative Officer for the Municipality of Bethel Park. Prior to being named the Municipal Manager, LTC Christian served as the Deputy Commander and Chief of Staff for the 198th Infantry Brigade at Fort Benning, Georgia.

Enlisting in the Army in 1992, LTC (R) Christian’s first duty assignment was in the Republic of South Korea, serving in the United Nations Command Honor Guard Company, (Eighth United States Army) and was subsequently assigned to Fort Bragg, North Carolina. There LTC (R) Christian competed for and was awarded a 3-year Green to Gold Scholarship and was discharged to attend ROTC at Campbell University.  LTC (R) Christian was commissioned in 1999 through the ROTC Program at Campbell University located in North Carolina. Following graduation, he served in a variety of operational assignments in Armored Cavalry and Infantry organizations across the United States and abroad. LTC Christian has multiple combat deployments to both Iraq and Afghanistan.