No Limits Martial Arts opened its doors Jan. 14, 2019 with a mission to help the community become stronger through the use of martial arts.  “We want to help individuals of all ages become the best versions of themselves both physically and mentally,” said Owner Alicia Tavani, 6th Degree Black Belt, multiple Taekwondo World Champion, and two-time American Ninja Warrior from the NBC TV show.  “We’re here to teach our students that there are No Limits to what they can achieve!”

Tavani started martial arts at age 5 when her mother enrolled her into a program to develop confidence and focus and to help her with ADHD (Attention Deficit Hyperactivity Disorder).

“Growing up in Erie, PA, I lacked confidence from being bullied as a child and having an abusive father.  But after I enrolled in martial arts, I fell in love with it, developed confidence and began competing,” said Tavani.  “At age 13, I received a scholarship to enter the Instructor Training Program (now called the Legacy Program) from Senior Master Eric Stitt who I trained with from age 5 – 21.  “He was a father figure for me and a very positive male role model.”

Tavani discovered that she loved teaching and realized she could support people in developing their confidence, discipline and self-defense skills helping them to become better versions of themselves and grow.

She went on to earn a business degree from Gannon University and then moved to Pittsburgh to attend Point Park University where she received an additional degree in education.  During this time, she worked as an instructor for Senior Master Kevin Kaminski, 7th Degree Black Belt.

From there, she received an opportunity to move to Orlando and manage a Victory Martial Arts location under Chief Master Sergio Von Schmeling who owed 40 locations at the time.  “He taught me about martial arts and how to operate a school and a business that went beyond teaching not only competition techniques, but also how to run a school supporting life skills,” said Tavani.

After working seven years in Florida, she moved back to the Pittsburgh area to be closer to family and to open her own school.  “When I found the site at Cool Springs, I thought it was perfect.  I also researched the community and felt it was a great location to open a school like mine focusing on family and individual martial arts along with instilling the values of honesty, discipline, respect, communication, belief, and self-esteem.”

In the early days until her space was completed at Cool Springs, she rented another room at the site and set up shop enrolling 30 students in the first three weeks.  Soon after, she was up to 70 students and had to rent a larger room; from there, she grew to 120 students and because her space still wasn’t complete, she had to continue setting up and removing classroom mats at the beginning and end of each class.   “This was a huge undertaking, but the parents were so caring and loving that they helped me to move the mats back after each class,” she said.  “Then finally, our official space opened, and we moved in with 130 students; now even after the pandemic we’re at 290 students!”

Those interested are asked to set up a FREE 30-minute, one-on-one session.  There, the potential student’s goals will be discussed.  Visit www.nolimitspgh.com for full details.

WHAT ELSE WOULD YOU LIKE BETHEL PARK RESIDENTS TO KNOW ABOUT NO LIMITS MARTIAL ARTS?

“Your training never stops,” said Tavani.  “We are a second family and offer a positive, safe atmosphere.  The families here are so loving, caring and very accepting.  And, we have amazing instructors with each having passed an intensive certification process based on 40 years of tradition, research and development.”

Tavani is one of only six brand ambassadors for the American Taekwondo Association (the largest marital arts association in the U.S.).  “Martial Arts has helped me become the best version of myself throughout all aspects of my life,” said Tavani. 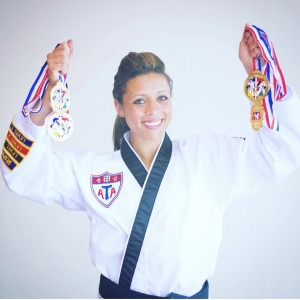 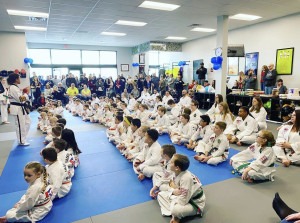